The Veltins Arena witnessed a match for the ages as a valiant Schalke side fell to the sword of a miraculous 2-goal turnaround from a 10-man Manchester City. After Sergio Aguero’s 18th minute opener was cancelled out by Nabil Bentaleb’s brace from the spot, courtesy of an extremely contentious VAR decision, the heroics of the returning Leroy Sané and Raheem Sterling kept City’s hopes alive in the Champions League in spectacular fashion.

Here are the talking points from City’s stunning 2-3 Round of 16 victory over Schalke.

City took their foot off the gas

Despite Schalke’s nightmarish form in the Bundesliga this campaign, Pep Guardiola’s time in Germany made him well-aware that there are no free lunches against a side brimming with talent, notably in club football’s most elite competition. However, this message did not seem to run through the veins of his troops as City eased off after Sergio Aguero’s tap-in. While a masterclass is not considered as standard procedure from the Sky Blues in every contest, pedestrian spells are harshly punished in the Champions League. Whether that emerges in the form of a fiery Lyon side rattling City to the core or fortune favoring the opponents as last night suggested.

VAR: Applies in theory, not in practice?

City’s row with the Champions League runs deep and a dubious decision from the Video Assistant Referee (VAR) did not help matters in the slightest. As Daniel Caligiuri’s shot from outside the area struck Nicolas Otamendi, replays clearly showed that a handball verdict could not ring true as the Argentine was evidently trying to move his arm out of the way. As referee Carlos del Cerro Grande consulted VAR to confirm the nature of the decision, both sets of players and fans were left waiting for the call after a delay of 136 seconds. To make matters worse, the decision stood and Nabil Bentaleb equalized from 12 yards out. After the match, it was revealed that the pitchside monitor was not working which defeats the purpose of the system’s introduction in the first place.

There is no denying that City were hard done by the incompetence of VAR, however, Pep Guardiola’s makeshift back four did not cover themselves in glory. As the Catalan replicated the makeshift central defensive pairing of Fernandinho and Nicolas Otamendi from the boisterous win over Arsenal, the South American duo were simply not at their domineering best. The ever-reliable Fernandinho’s clumsy challenge on Salif Sané gifted Nabil Bentaleb a penalty as the former Spurs midfielder made no mistake in securing his double. In addition to this, he earned a yellow card and has been suspended for the second-leg clash at the Etihad. In the 68th minute, Otamendi was given his marching orders by the referee after receiving a second yellow for an ill-timed challenge from behind on Guido Burgstaller. The 31-year old will join Fernandinho on the suspension list. 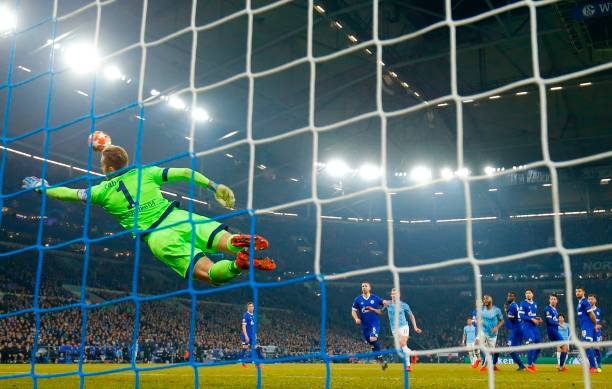 In the build-up to the contest, former Schalke teammate, Tranquillo Barnetta lauded Leroy Sané as ‘special’ and claimed that there was no bad blood from the supporters towards the German sensation on his return to the Veltins Arena. There were plenty of raised eyebrows as Sané was denied a chance to showcase his minerals in front of his former employers as the workmanlike Bernardo Silva was preferred to start by Pep Guardiola. As the tie was seemingly slipping away from City after Otamendi’s sending off further solidified Schalke’s stronghold over proceedings, time stood still as Sané struck an absolute pearler of a freekick to level the scores. Just 5 minutes from stoppage time, the comeback was on for the Citizens and it was all down to a moment of genius from 2018 PFA Young Player of the Year. Sané’s glorious freekick against Hoffenheim during the group stages proved that the 21-year old had this in the locker, but to come off the bench and dispatch a goal of such significance only cements his credentials as man for the big occasions. However, it was ultimately a bittersweet night for Sané as he chose not to celebrate in front of the club that made him a sought-after prospect for many of Europe’s top suitors.

Amongst a host of iconic moments that have defined the Guardiola era, the abundance of last-gasp victories will be remembered with a unique fondness by those who have feasted their eyes on this marvelous team. A man who is the protagonist at these stages are on a knife edge is none other than Raheem Sterling. The England international was pivotal in City’s title win last campaign after securing late winners against the likes of Bournemouth and Southampton. He has defied his critics by stepping up against top dogs such as Spurs, Arsenal and Chelsea this campaign and yet again, Sterling was the difference maker on the night. After a bright start to the spell which saw the former Liverpool winger engage in intricate one-two’s with David Silva and leave Caligiuri for dead on several occasions, Sterling fizzled out of the contest, much like his fellow attacking compatriots. However, after a massive punt from Ederson, Sterling took full advantage of a slip from Schalke’s last man to stroke the ball past an out-of-position Ralf Fahrmann and send the City supporters into a frenzy.

With three away goals in the bag and disciplinarian Guardiola ensuring that the Sky Blues iron their flaws at the Etihad in the second leg, it would not be a safe bet to discount City.