Since the curtain-raiser at the Emirates that saw Arsenal and Manchester City cross swords in August, it is fair to say that Unai Emery and Pep Guardiola have undergone an assortment of managerial trials and tribulations that come with the unrelenting pace of the Premier League. While the former commendably steered his side to a 22-match unbeaten streak in all competitions till December, the wheels have seemed to come off in recent weeks as the wounds from the toothless defeats to West Ham United, Liverpool and Manchester United in the FA Cup are still very fresh. On the blue side of Manchester, Guardiola’s flawless start to the new year was dented in suicidal fashion to strugglers Newcastle United after a horrific 1-2 loss.

If not for Liverpool falling by the wayside against Leicester City in a 1-1 draw on Wednesday, title talk would persist, but at a much-muted decibel. With the Gunners eyeing a spot in the top four and City aiming to return to winning ways to stay hot on the heels of Liverpool, all eyes will be on Sunday’s clash to see who fully embraces the stakes at hand and steps up to the plate. 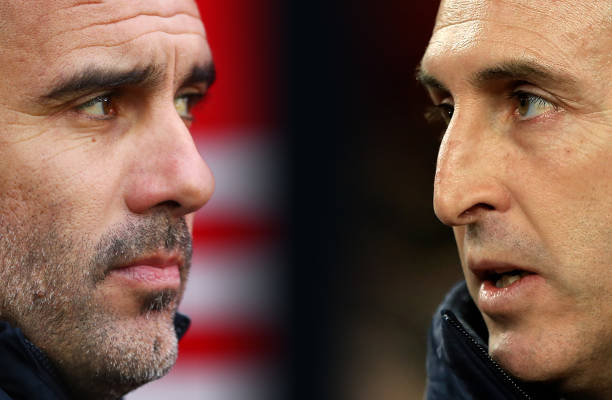 As the race for the title lives to see another day, Pep Guardiola’s troops will count their stars lucky for not being ably punished for their dismal display against the Magpies as 5 points separate City and Liverpool at the top of the table. Despite City’s uncharacteristic inconsistencies coming to the fore, it would be immensely premature to discount the reigning champions from setting the record straight at the Etihad against an erratic Arsenal side.

With 31 goals scored and a single conceded in their last 8 matches, City have turned a corner after a diabolical December which saw them succumb to 3 defeats in 7 games. During this period, the player who has taken on the mantle of City’s key man upfront is Leroy Sane. Nominated for the PFA Premier League Player of the Month for January, the German wideman has registered 2 goals and 4 assists in his previous 6 starts, including his decisive winner against Liverpool. Sane has proven to be extremely fruitful against the Gunners, terrorizing Hector Bellerin on several occasions while dispatching 3 goals since he joined the club in 2016.

Along with the former Schalke man’s purple patch on the flanks, Kevin De Bruyne’s return to full fitness is worth its weight in gold for Pep Guardiola’s men. While the Catalan tactician was careful in his choice of words as he encouraged his side to “solve the problems collectively”, he is fully aware of the Belgian’s talismanic presence and how instrumental his presence is bound to be in the sprint for the coveted trophy.

The 27-year old has showcased flashes of brilliance since his reintroduction to the starting 11, however his long spell on the sidelines through injury makes it a sizeable challenge for De Bruyne to slowly, but surely revert back to his vintage best. While he was majestic against Burnley in the FA Cup as he scored a stunner and provided 2 assists, the former Wolfsburg midfielder was all over the place against the Magpies. Nonetheless, the Citizens will be banking on De Bruyne to be a constant peril for the brittle Arsenal backline to halt.

Sergio Aguero continues to be a vital cog in City’s pursuit of glory and has an inspiring record of 7 goals in 11 matches against Arsenal. The Argentine frontman may well be the difference maker in the contest. With a colossal expected goals (xG) of 0.70 per 90 minutes, the 30-year old is always a threat up top and revels when the world is watching.

Since Roberto Firmino’s strike at the Etihad, City’s defence have managed to stay watertight at the back and not concede even a single goal at home, albeit against lower league opposition such as Rotherham United and Burton Albion in the process. Attack is the best form of defence for an Arsenal side that present a different challenge of their own with the division’s deadliest striking duo in Pierre-Emerick Aubameyang and Alexandre Lacazette among their ranks.

However, it is fair to say that City’s defence let themselves down against Newcastle United. Even the ever reliable Aymeric Laporte was not at his usual resolute best, however the Frenchman can be let off the hook for what was his first poor display this season.

Kyle Walker continues to polarize opinion as his form has has fallen off a cliff from his exploits last his season. There is no denying the Englishman’s quality, but he appears jaded from the Three Lions’ semi-final run in the World Cup, coupled with a shortened holiday which has not helped matters. His social media antics to taunt Liverpool ahead of them dropping points do not help his cause at the present moment. Aubameyang will target the former Spurs defender as Citizens’ weak link at the back and aim to get in behind to make a nuisance of himself.

Danilo has been a revelation at left-back, however even the Brazilian international was extremely underwhelming on the night. He will have his hands full as Lacazette has a tendency to roam in the right channel and link play effectively.

While it is never a good idea to get ahead of yourselves and merely put the shock defeat to Rafael Benitez’s men under the carpet, the performance was not an accurate reflection of a relentless City side that are the only team in the top six to be in contention for four trophies. However, the pressure in on for City as any other result that does not guarantee three points could signal an end to their title hopes as the margin for error is miniscule at this point.

Laporte’s level-headed approach regarding the Citizens’ mindset towards retaining the Premier League crown must be the headspace that the dressing room identifies with to come up trumps as the stakes continue to get higher.

“There are still 14 games left, so we are going to fight until the end. We have a great team, no matter what the result was, so I am not worried about the performance and the players we have in our squad.”

In terms of absentees, only Vincent Kompany is confirmed to be out of contention through injury for the tie while Benjamin Mendy is fit, but looks doubtful to be a starter. 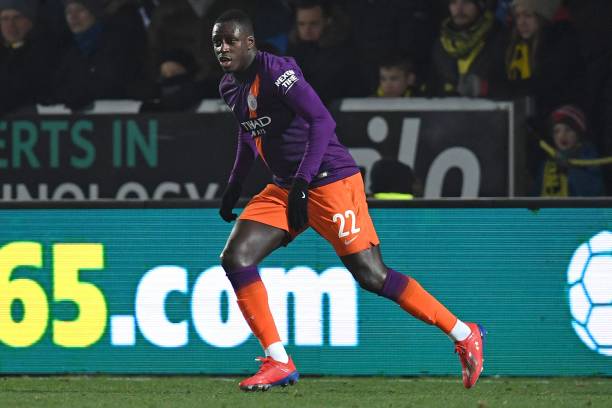 On the back of a scrappy 2-1 victory over Cardiff City, Arsenal are entering the contest with three points in the bag unlike their opponents. However, the topsy turvy nature of Emery and co makes them a bit of a wildcard to square up against.

Due to the former PSG boss’ first season at the helm, the players are still finding their feet in a new system after Arsene Wenger bid farewell to the club after 22 years. Factoring in such considerations, Emery will demand time and patience during this transitional period to blood in new talent in the transfer windows to come and familiarize the squad with his tactical nuances.

The Gunners’ form guide in 2019 is uninspiring, with 4 wins and 2 losses to their name in their previous 6 outings. January has been a symbolic month that describes Emery’s time in-charge as the sensational 2-0 triumph over Chelsea was followed by a catastrophic defeat to Manchester United.

To make matters worse, Arsenal’s defence is enduring an injury crisis as the likes of Hector Bellerin (ACL), Rob Holding (ACL) and Danny Welbeck (ankle) have been sidelined for the season while Sokratis Papastathopoulos (ankle) will return to the first-team fold after a month.

Laurent Koscielny is available for selection; however, the Arsenal captain was feared to be struck with a fractured jaw against United.

The North London outfit can exploit the City backline as Pierre-Emerick Aubameyang and Alexandre Lacazette have been firing on all cylinders this campaign. The pair struck a goal apiece against Cardiff during mid-week and the former is only a goal shy of Mohamed Salah as the top goalscorer in the Premier League with 15 strikes. The Gabonese forward made history by becoming the fastest player in Arsenal’s history to reach 25 goals in 37 matches, usurping a certain Thierry Henry who achieved the same feat in 42 games.

Lacazette has become a fan favorite at the Emirates as his game is way beyond just putting the ball into the back of the net. Not only does he have 9 goals and 5 assists, but he also puts in 1.2 tackles per match in the league which makes him a brilliant presser and he may pressurize the central defenders in trying to play out from the back.

The Arsenal faithful might witness a debut for the on-loan Denis Suarez from Barcelona. The 25-year old oozes class in midfield and may be reunited with his former employers on Sunday. Emery heaped praise on the Spaniard ahead of the tie:

“He has adapted very quickly and his qualities can help us but also his ambition.” 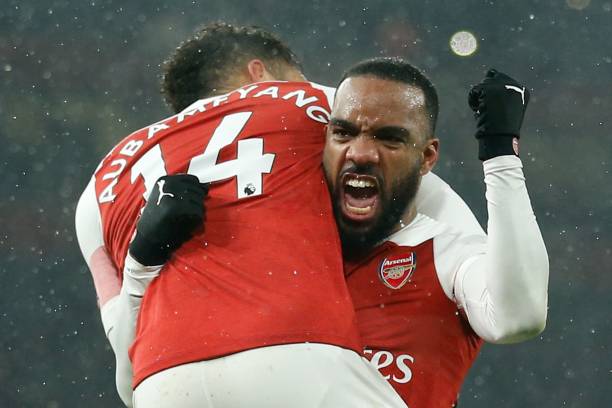 It is clear as day that both sides play on the front foot and have defensive issues and it may well boil down to who outscores the other to gain the all important three points.

City are superior in quality in both departments and will be aiming to bounce back with a bang against an Arsenal side that are competent, but are far behind Guardiola’s men in their progression to come away with a victory.