They aren’t exactly on their last legs, but Vincent Kompany, David Silva, Sergio Aguero and Fernandinho – the reliable old guard of Manchester City Football Club – will not be around too much longer.

City are doing a good job of succession planning, having brought in some of the world’s most talented young players, but one of the most important roles is that of club captain, which Vincent Kompany has assumed for many a year now.

Kompany is out of contract in the summer but I think we all expect him to stay at least one more year. But what about beyond the era of Kompany, Silva, Aguero and Fernandinho? Who could wear the armband and lead the club on the pitch and in the dressing room?

Here are four candidates and a wildcard for longer term consideration…

The newest signing of the candidates, Laporte has settled well into the Premier League and in Pep Guardiola’s mind is one of the best left-footed central defenders on the planet.

Beyond his impressive skill set though, Laporte is becoming more of a presence and commanding figure. His calm, no-nonsense approach to the game lends itself well to the role of captaincy.

Since he was a mid-season signing, his presence in the dressing room wasn’t as well covered in the Amazon documentary series as others, but if he is respected and popular among the players, the 24-year-old Basque defender could be a candidate for captaincy or at least in the chain of command.

Goalkeepers are not the common choice for club captaincy, but Ederson’s age and the longevity of goalkeepers means he could be around for another decade in the City goal, which would mean he could be a familiar presence as players come and go from the club.

Fearless and brave, Ederson is the sort of guy you would follow into battle and that is always a plus on the pitch. Roy Keane was such a captain for neighbours Manchester United during an era of great success for them.

The Brazilian would be a long shot for the captaincy however, again because he’s a goalkeeper. Although they have the best view among the players, the restrictions on where they can go (although in Ederson’s case, he does like a trip up the pitch!) therefore also limits the instructions they can give out. 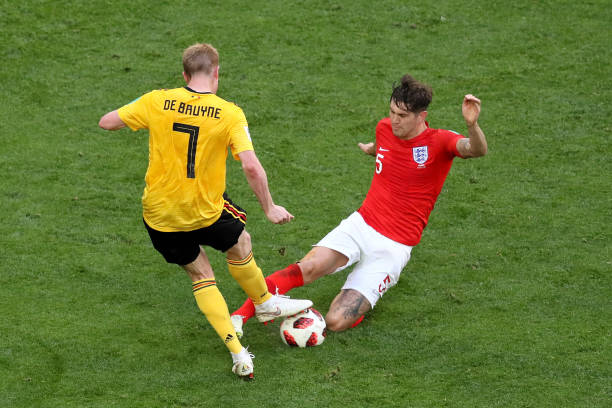 A strong candidate for the long-term captaincy is Yorkshire boy John Stones, who Pep Guardiola has helped develop into arguably the best English centre-back of his generation.

Composed and classy on the ball, Stones’ presence off it has evolved, with the 24-year-old going from slightly timid and error prone in his first season at the Etihad to a player with good confidence levels and not afraid of barking out instructions.

Stones’ obvious tactical intelligence also works in his favour, as does his nationality. For the image of the club, an English captain who also represents his national team would be a positive.

By the time Vincent Kompany does hang up his boots, Stones will surely be one of the names in Guardiola’s mind to wear the prestigious captain’s armband.

Last but not least from the main candidates is the Belgian maestro Kevin De Bruyne, who is almost the bridge between the older generation in their final years at City and the young lads who have more recently arrived, such as Sané, Jesus and Mendy.

At 27, De Bruyne is mentally mature and is often the man Guardiola calls over to deliver instructions to. It’s clear that De Bruyne has an incredible understanding of the game and could one day be a manager.

Another thing in De Bruyne’s favour is his temperament. He rarely loses his cool and is a calm, responsible figure who has assumed a leading role in the side over the past couple of years.

De Bruyne is our choice for club captain after Vincent Kompany’s time is up, because he ticks all the boxes and is in his prime years as a footballer.

And in the long, long-term?

Here’s a name for even longer term consideration: Phil Foden. He’s just 18 right now and probably at the bottom of the list of players who would wear the armband, but if he can truly cement his place in City’s squad for the years to come, by the time he reaches his mid-20s and beyond, he could be the dream captain for Blues.

Imagine it: a local lad captaining Manchester City to domestic and European success. It’s what dreams are made of and possibly the only thing that could make these years of newfound glory even better. If De Bruyne does take the captaincy next, Foden could be his perfect successor.

Who do YOU think should be City’s club captain in the future years? Vote in our Twitter poll and share your views.

City's old guard won't be around forever, so who do you think should be the future club captain?