It’s been a week of varying successes for Manchester City’s youth sides, but largely on the positive side. City had teams competing in the U18 Premier League North, U18 Premier League Cup, UEFA Youth League, Checkatrade Trophy and Premier League 2 over the past fortnight and the sides are certainly ones to keep close tabs on for the future.

Last Saturday, City’s U18s made the short trip to Finch Farm to face table-toppers of the U18 Premier League North, Everton. Kieran Phillips opened the scoring and doubled it with two finishes inside just ten minutes. The striker then completed his hattrick on the hour mark and for the remaining 30 minutes the scoreline remained 3-0 to the Merseyside outfit.

City opened their U18s Premier League Cup journey with a commanding performance, in which they turned the scoreline from last week the opposite way around at the City Football Academy. Just prior to the half-time whistle, Keyendrah Simmonds opened the scoring by getting on the end of Ryan Corrigan’s cross from the left to get his fifth of the season in all competitions. Lewis Fiorini then notched a late brace to complete the rout and start the Cup in the way the U18s mean to continue.

City then began their UEFA Youth League campaign by hosting Lyon at Academy Stadium with a very youthful side that was captained by Claudio Gomes. Lyon opened scoring through Paul Devarrewaere who followed up on Hamza Rafia’s freekick that struck the woodwork. Lyon then doubled their lead as Lenny Pintor tapped-in to an empty net from close range. Ian Carlo Poveda then expertly manoeuvred his way past three players and found Felix Nmecha who placed the ball with power and precision into the corner leaving Lyon ‘keeper Malcolm starstruck. City were knocking on the door as Rabbi Matondo fired a shot at the ‘keeper which Poveda followed up, only for the Malcolm to be equal to it displaying a fine reflex save. Lyon then dispatched of City with another two goals in quick succession from late substitutes Mathis Cherki and Cedric Augarreu, Cherki in-turn became the youngest ever UEFA Youth League goal scorer at 15 years and 33 days.

The same day that City’s U18s travelled to Everton, City’s U23s hosted Derby County at the Academy Stadium. Felix Nmecha provided the opener three minutes in with an unbelievable strike as he received the ball on his left, feinted to shoot, shifted it onto his stronger right and rifled it into the top corner. Just over ten minutes later, a perfectly-weighted ball was threaded to Lorenzo Gonzalez who found the bottom-left corner in a calm fashion. In the latter stages, substitute and recent first-team debutant Adrian Bernarbe, found Benjamin Garre with a cross-field ball in which the Argentine Garre, controlled with a first touch straight into his path to fire the ball through the ‘keeper’s legs to cap off a well-earned victory.

Three days after disposing of Derby, City’s U23s faced Crewe Alexandra in the Checkatrade Trophy. City fielded a similar side to the weekends game and didn’t disappoint either. Yet again, City opened the scoring early as Tom Dele-Bashiru hammered the ball home after just two minutes. 20 minutes on, Gonzalez scores his second in just as many games with a wise chip over Ben Garratt in the Crewe goal. Crewe pulled one back through substitute Alex Nicholls and City were equal to that as a substitute of their own, Taylor Richards, chipped a penalty down the middle that Poveda won after being brought down in the box. The tale of substitutes scoring continued as Henri Ogunby volleyed Rabbi Matondo’s cross into the back of the net to seal a 4-1 victory to City.

City’s U23s’ week was completed with a trip to the Fairwood training ground in Wales to face Swansea yesterday. Matondo made it 1-0 on 38 minutes, but this was speedily cancelled out by Aaron Lewis’ strike two minutes later. On the 74th minute mark, Matondo reinstated City’s lead, doubling his goalscoring output for the game too. Less than ten minutes later Jeremie Frimpong made it three following an assist from Ben Knight on his U23s debut. Welshman Matondo completed his hat-trick deep into injury time in his homeland assisted yet again by Poveda to round off an exemplary weeks work.

With two eye-catching goals over the past fortnight, Felix Nmecha is the ‘One to Watch’ for this round-up of City’s youth. Elder brother Lukas Nmecha’s loan to Preston North End means Felix is the only Nmecha at City for this campaign and is certainly living up to the name in a differing role.

The attacking midfielder had a lengthy spell out of action over summer and the beginning of this campaign but has returned in fine fashion. Nmecha is best utilised as one of the two ‘free-eights’ in City’s midfield trio. His attributes are fronted by his attacking talent when in possession near the oppositions’ goal. Nmecha excels in driving the ball forward and creating chances. He’s often found hovering around the edge of the box whether that be waiting for a pull-back or receiving the ball to shoot from distance with such an eye for goal.

Nmecha was recently earmarked by Pep Guardiola as one of the reasons, alongside Phil Foden and Bernarbe, as to why City haven’t invested in an attacking midfielder with such a plethora of talents already in that role. His ascent is sure to continue and like Foden and Bernarbe, Nmecha could have first-team opportunities on his way if he continues in this manner. 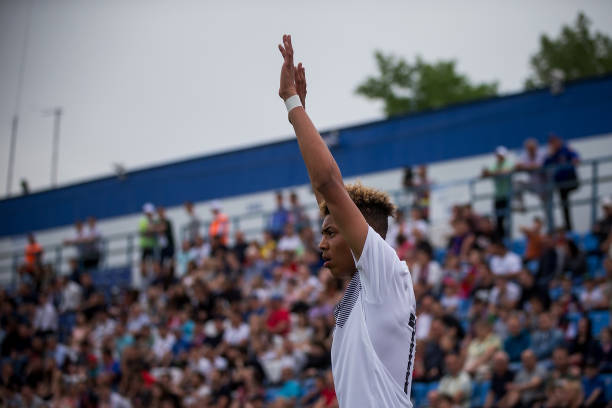