Something rare happened for Manchester City in their third round draw for the Carabao Cup and that was that they would be travelling a team which was below the Championship, in this case it was League One’s Oxford United.

While the phrase ‘giant killing’ was not attached to this fixture there was still a sense of mystery over Pep Guardiola’s team with the immense squad depth City possess.

Regardless of who started, City’s quality shone through and made it look a comfortable performance against the League One side, but, there were some positive aspects to take from City’s comfortable 3-0 win at the Kassam Stadium.

Make no mistake, Guardiola wants to win every trophy he can on these shores and despite this being a Carabao Cup tie, he still fielded a strong side. City’s team had a great mix of youth and experience. The likes of Phil Foden and Brahim Diaz were playing alongside Vincent Kompany, David Silva, Gabriel Jesus and Nikolas Otamendi, and this will have proved to have been a great learning experience for those on the pitch and showed that Guardiola wants his City side to retain this trophy.

Phil Foden comes into his own

While his playing time in the Premier League is limited, the Carabao Cup is the perfect competition for Phil Foden to thrive and show off his attacking prowess. The midfielder did exactly that tonight – the ball he played to Brahim Diaz to set up Jesus for City’s opener in the first half was simply sublime and he capped off an amazing performance by scoring City’s third towards the end of the match. Sliding on his knees and kissing the badge in front of the 1,000 or so City fans who had travelled must have felt like a huge weight lifted off Foden’s shoulders as he scored his first competitive goal for the club and could be the spark needed to show his full potential. Foden was not the only youth selection to perform well, the likes of Zinchenko and Diaz also impressed. 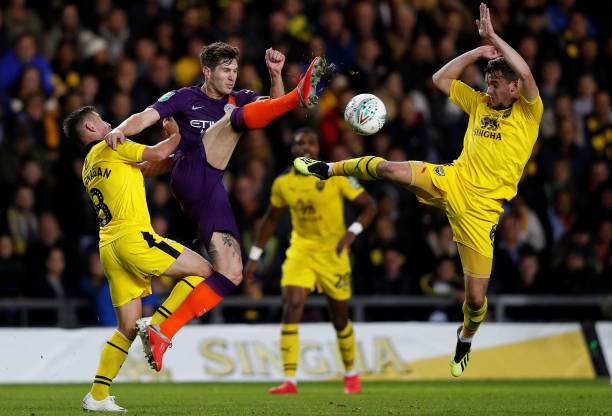 Guardiola had alluded to it during the early stages of the season that he may experiment with putting John Stones in midfield and after a late test run at the weekend, he put Stones in the holding role on Tuesday night. While it was against a side of not the best footballing ability in the form of Oxford United, Stones did not look too nervous in that role and could be an option for the future when Fernandinho decides to leave or retire at City.

Aro Muric has a sense of Ederson about him

When substitute goalkeeper Aro Muric was recalled from his loan from Dutch side NAC Breda, there were a few doubts as to whether he could fill the Claudio Bravo sized hole on City’s bench. The 19-year-old proved he has the potential to be a part of City in the long term against Oxford. Like Ederson, he had the confidence to come out of his box to meet the ball during open play and was also not afraid to go for the ball during set pieces. While he may not make many appearances over the next few seasons while Ederson is between the sticks, Muric is certainly one for the future if he stays confident whenever he is given the chance to shine.