“The City showmen are on stage again, earning rave reviews once more” screamed Martin Tyler as Manchester City dismantled another opponent, on their way to becoming the first Centurions. The Citizens can put a credible argument together for the 17/18 side to be the best ever, in the Premier League that is. Granted Arsenal went unbeaten and Manchester United won the treble, however, neither has ever reached 100 points in a single season.

When Gabriel Jesus ran onto Kevin De Bruyne’s through ball and lobbed Alex McCarthy to confirm City as the Centurions, the cameras captured Pep Guardiola charging down the sideline in a frenzy and the players swamping Jesus near the corner flag. Most intriguingly, the cameras would then cut to the crowd, amongst the expected sea of sky blue was the occasional yellow and black jersey.

This was no coincidence, whilst it’s important for the City fans to savour the beautiful football which graces the Premier League, one of City’s feet remains firmly planted in the past. The yellow and black shirt the supporters wore was donned by City at the turn of the century, in arguably City’s most important game to date. Its fluorescent yellow is often visible at City games, serving as a constant reminder to that game.

The 1999 season had just reached its climax, the small housekeeping of the playoffs were all that was left to be dealt with. The Football League Second Division, now League One, playoff final was between Man City and Gillingham. City found themselves teetering on the brink of football obscurity, a loss would consign them to another season in the third tier. One more season in the third tier would have been disastrous for the club. City had managed to maintain attendances around the 30,000 mark but that number would soon dwindle the longer they spent there, ask Portsmouth.

That bleak future seemed to be on the cards when City found themselves 2-0 down with only stoppage time remaining. Kevin Horlock scored what seemed to be a consolation goal as the City faithful started to leave the ground- but then something extraordinary happened. Paul Dickov received the ball on the edge of the area, spun his defender, and smashed the ball into the back of the net. Dickov’s goal set up a penalty shoot-out, which City would win.

Incredibly, Man City’s lowest moment mirrors their biggest triumph. Thirteen years later another City striker would brand himself a cult-hero when Sergio Aguero blasted the ball past Paddy Kenny to secure City their first title since 1968.

It’s not inconceivable to think that game changed Manchester City’s fortunes. Without it, The Citizens could have very well entered free fall which in turn wouldn’t have seen Sheikh Mansour invest in the club, propelling them to the European powerhouse they are now.

That day in London in 1999 shaped the City we know today, but it didn’t do it all. Throughout the clubs history, there have been certain figures that have come to define what it means to Manchester City, what it means to put on the sky blue jersey.

When the 1990’s rolled around Manchester’s popularity was on the rise thanks to two sets of brothers; the Nevilles and the Gallaghers. Across the city, Manchester United were laying the foundations for their Class of ’92. This wealth of talent forcing its way into United’s side gained them national support and recognition. As Gary and Phil Neville broke into the United squad, Liam and Noel Gallagher were preparing to release their first album. The Brit-pop revolution that was instigated by Oasis made Manchester City openly cool, as the brothers wore the shirts around the city and in music videos.

City just needed a star, somebody that would take them to the moon, they found him a far away land. Georgi Kinkladze arrived in Manchester with little fan fair, the Georgian wasn’t well known outside of his homeland. He grew up in Soviet Georgia but didn’t have the communist style of football which had come to define sides such as Dynamo Kiev – hard work, efficiency and working as a unit. Instead, he played the game like a samba, like the Brazilians, his close control and dribbling could, easily, stake a claim to be the best in the league, and maybe even the best to this day.

Kinkladze spoke no English and at first found it hard to settle in Manchester, however, the Citizens loved him. He soon reciprocated the feeling and feel in love with, and in, the city. Kinkladze was both City’s golden child and their downfall. His attacking midfield role was unorthodox at the time he arrived at Maine Road, leading to managers constantly tinkering tactics to try to accommodate him.

It’s not out of the ordinary to think Kinkladze’s constant inclusion led to that infamous playoff, Noel Gallagher even predicted it. What Kinkladze did succeed in was creating a thirst for attacking flair among the City faithful. A mantle that Kinkladze pass onto players such as Elano, David Silva and De Bruyne.

These luxury players have come to epitomise Manchester City, when the sky blues backs are against the wall they can rely on individual brilliance. Kinkladze in the 90s, Elano in the late 00s and Silva post-Mansour.

Whilst Kinkladze paved the way for City’s brand of attacking football others have helped create the philosophy that we see Guardiola implement today. Yes, Guardiola has a distinct brand of football but its foolish to completely overhaul a club – he takes his philosophy and blends it with what already exists at a club.

One such philosophy Guardiola is desperate to keep is the inclusion of young Mancunian talent. A City fan since birth, a Roy-of-the-Rovers moment. However, this task has proved difficult for City, the talent required to make the first team has only emerged once a decade and the last two starlets have been forced into early retirements. The first of these two was Paul Lake.

Lake was part of a young City collective that, in 1989, dismantled Man United at the ‘Maine Road Massacre’. Mark Hughes and Paul Ince watched on in ore of the young midfielder’s performance that day, a performance that almost proved to be the final nail in the coffin for Sir Alex Ferguson’s reign at United.

Journalists began to catch wind of the starlet’s talent, even declaring him as England’s next big hope. However, one year removed from the derby Lake would see his career disappear in front of him. Lake was playing centre-back in a rainy midweek fixture against Aston Villa. After a solid first half performance from the confident Lake, he challenged Tony Cascarino to win a 50/50 ball. Upon reaching the ball he stumbled and fell awkwardly on his knee, at first the injury seemed a knock. But it was so much worse. Lake had ruptured a cruciate ligament and went on to only play two more games for City, the same amount of further cruciate ligament injuries he would suffer in his short career.

Lake struggled with depression through his long, injury induced, layoffs. Despite his tag of potential world beater disappearing his place in City fans hearts didn’t. In 1996, following his retirement, City hosted a testimonial for him, where he emerged onto the Maine Road turf in full kit and knee brace to stop his knee falling apart. 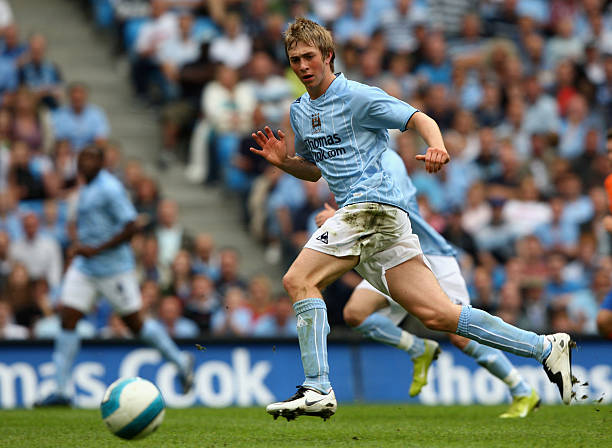 A decade later City had found themselves a new Paul Lake, Michael Johnson. Johnson still holds the record of being the last Mancunian born player to represent City in the derby. Like Lake, Johnson’s City career was cut short and like Lake, he made his name in a derby. He was tipped for the top but the pressure put on him took its toll and it came out City’s crown jewel was suffering from depression. Johnson was forced to retire and politely asked to be left alone by the public.

Now, a decade after Johnson’s meteoric rise and subsequent fall, Phil Foden stands where the other two stood. Foden, from Stockport, is a generational talent, the young midfielder led England to victory at the U17’s World Cup, won the 2017 young sports personality of the year and has muscled established internationals out of the City side.

Watching City brush aside Huddersfield last weekend without really hitting top gear was incredible. But whilst it’s important to enjoy the football we are currently witnessing, arguably the best to grace the Premier League, it’s important to remember the past. Past players that have shaped the identity that has become Manchester City. The badge may have changed, it’s no longer the eagle that I fell in love with as a child, but that same identity is carried through generations. When Sheik Mansour purchased Manchester City in 2008 he said “we are building a structure for the future, not just a team of all-stars” an ethos that delves into the past as much as preparing for the future.

As Italian philosopher George Santayana once said, “Those who cannot remember the past are condemned to repeat it.” When Mansour created his vision for Man City he imagined a footballing superpower, one that was a trailblazer for the future but never forgot where it came from. Across the City product, you can see nods to legends such as Colin Bell, Mike Summerbee and Bert Trautmann. A club which sprung from the smog of 19th century Manchester in the Ardwick suburb has grown beyond all imagination. This past has shaped what we expect when we watch players on the pitch, young local talents and exciting attacking football – it’s a philosophy that suited Guardiola, not one he created.

City Watch Review: ‘All or Nothing: Manchester City’ Episode 3 (Winter is Coming)
Kun, Laporte, Mendy or Bernardo? Vote for August’s City Watch Player of the Month!
To Top