After dusting off the cobwebs at the Emirates last weekend, Manchester City bring football back to the Etihad as they look to open their home account against Huddersfield this Sunday.

With last season’s home tie overshadowed by the imminent title celebrations, Pep Guardiola’s side will now have a keen eye on taking all three points come 90 minutes, having being held to a 0-0 draw in May. A rare opportunity thus presents itself for City to actually increase their points tally against last season; this time, the focus will be on nothing but putting the Terriers to the sword.

Huddersfield were one of many teams to dangerously flirt with relegation last season, scoring the joint-lowest goals as they managed to finish four points above the drop zone. However, they are not to be underestimated. David Wagner’s team are capable of frustrating the biggest teams on their day, having ensured their safety with back-to-back away draws against City and Chelsea during their final fixtures in May.

This season brings new challenges though, with the strength of newly promoted clubs such as Wolverhampton and Fulham calling into question whether the Terriers have the quality to remain in the Premier League for another year.

Without further ado, let’s take a look inside the opposition…

After new arrival Ben Hamer did not cover himself in glory against Chelsea at the weekend, Huddersfield’s number one Jonas Lössl is expected to return to the starting line-up. Having lacked match fitness after not playing a minute for Denmark at the World Cup, Lössl will be expected to marshall the box here after making his previous loan move to the Yorkshire club permanent this summer.

The most assured aspect of Huddersfield’s team is bound to be their backline. David Wagner is all too aware of the level of defensive solidity needed to foil City’s plans, and has stated that he favours “a different idea and set-up and mindset as well” when facing the top six teams. This surely means a continuation of the five at the back that faced Chelsea, with Terriers stalwarts Christopher Schindler and Mathias Jorgensen joined by Terence Kongolo in the centre of defence. All three men are very physical presences, posing a concern to Guardiola’s relatively diminutive side.

Florent Hadergjonaj and Chris Löwe will occupy wing back positions, yet with Wagner favouring a tactical solidity, it is unlikely the two will be left scrambling in the City half too often. Indeed, the midfield of Philip Billing, Jonathan Hogg, and Aaron Mooy will be asked to work as a functional unit, with Mooy keeping things ticking over as the more free-roaming number 8 to pester and pick City’s defence. The Australian will have a big part to play if the Terriers are to nick a goal.

Up front lies Alex Pritchard and Steve Mounie. Huddersfield’s top scorer last season, Mounie is a forward who relies on his presence to make space for attacks, so it will be interesting to see if Guardiola continues to show faith in the pairing of John Stones and Aymeric Laporte, or seeks to solidify the back line against Mounie with an appearance from the more rugged Vincent Kompany or Nicolas Otamendi. Pritchard meanwhile has looked a positive presence since joining from Norwich last January, despite only managing one goal. He showed in May that his energy is a threat, constantly getting in the faces of City’s players, and will consequently be one to watch out for.

However for the match on Sunday, it is likely to be Jonas Lössl that can make the difference for the Terriers. After surprisingly being rested against Chelsea despite not playing a minute at the World Cup for Denmark, the Danish shot-stopper will have the power to make the difference in defence for Huddersfield this weekend. 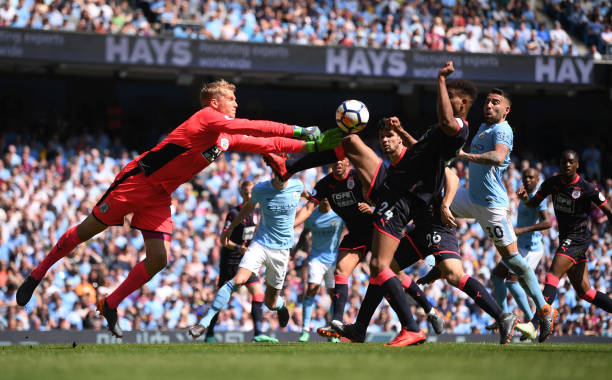 As we mentioned before, former Leicester goalkeeper Ben Hamer had a forgettable game at the John Smith Stadium. Consequently, the heightened anticipation surrounding Lössl’s return for Huddersfield betrays just how important he can be for the Yorkshire club. Though the Terriers were tied for the joint-worst goal difference last season with Swansea, it was their poor goal return that largely mooted Lössl’s solid efforts at the other end of the pitch. The Dane actually kept 10 clean sheets, tied with other goalkeepers at higher table clubs such as Jordan Pickford at Everton, and Mat Ryan at Brighton.

When reunited with his compact defence, Lössl will have the authority to command his area and possibly marshall Huddersfield to another astute defensive performance, should the odds fall in their favour.

In order to get the inside track on Sunday’s match, we spoke to Aidan Jones, who is the authority on all things Huddersfield for 343Futbol. Here are his thoughts on the weekend, the season ahead, and the changing landscape of promotion…

Thanks for talking to us Aidan. This season will hopefully bring some new energy to Huddersfield Town. Despite some spirited performances, they ended up having a risky time towards the bottom of the table last year. Do you see David Wagner taking a different approach to matters this time round?

I don’t think Wagner will take a different approach because he is extremely good at what he does. I think the main thing last season was getting used to the Premier League and the big step up. This season they will look to push on and secure a mid-table to bottom half finish and be a long way from relegation. Wagner will say he wants to survive relegation because he has to say that, but the club itself and the fans will look further up the table, which is definitely not beyond their potential.

The summer transfer window brought some interesting returns for the Terriers. Not only did they secure the permanent signings of impressive loan players like Jonas Lössl, Terence Kongolo, and Florent Hadergjonaj, but they strengthened with the likes of Erik Durm from Borussia Dortmund. Who do you see as the key names throughout the coming season?

I think the signings first of all will definitely have an impact on the team. Mainly because the majority of them don’t need time to settle in as they were there last year like you mentioned.

This campaign I think Aaron Mooy will again be a key man for the Terriers, not only because of his vision for a pass but his leadership to the team!

Although Erik Durm has not played in the premier league before he definitely has experience and that will help the likes of Sabri who also arrived this summer to settle in who’s only 21, even though they are different positions on the pitch.

Durm will link up well with Wagner after being with him at Dortmund.

That leads me to ask my next question. Wagner has particularly garnered a lot of respect for both bringing Huddersfield to the Premier League, and managing to keep them there on relatively limited funds. Yet with newly promoted clubs like Wolves and Fulham making significant moves in the transfer market though, it means Huddersfield have been a common pick for relegation. Do you think the landscape of promotion and relegation in English game has changed?

I wouldn’t say it has changed because it will always be difficult for teams to sustain their first season. As was proved with Leicester yet they went and won the league the season after! I think Fulham need to be careful, they have spent a lot of money and it will take time for the players to gel. On the other hand wolves have spent a lot as well but I just get a different feeling about wolves in the way that they already look like a top half premier league side.

Which clubs in the league do you see Huddersfield’s biggest threat in that case? Will it be a tough battle above the drop, or could they prove sterner tests for older mid-table sides?

I think they now have the grasp of how the league works and they know what it takes to get a result as was shown towards the end of last season. I definitely see them as a Bournemouth or Watford type team now — they have a squad of Premier League quality in that respect.

Going into the weekend, Pep Guardiola might have had previous matches against Huddersfield in mind when he commented on City’s desire to better combat teams that sit deep against them, with the Town the only team to keep a clean sheet at the Etihad last season in the Premier League. Do you think we’re likely to see the same defensive approach on Sunday, and throughout the season against City?

Definitely! Why change something that has worked in the past in specific matches, because Man City did struggle against that tactic. Even when they played in the FA cup the year before similar happened.

But that doesn’t necessarily mean it will work [throughout the season]. Prime example, Liverpool at home last season, where they just couldn’t cope with the attack from Klopp’s side.

Who will be piquing your interest when it comes to City this season?

Well I think naturally it was going to be Kevin De Bruyne but as has been released in recent days, he will be out for weeks which could affect the side. But if there’s a side who can cope loosing their best player, it is definitely Manchester City. Apart from him, I think you’ve got to look at Bernardo — he is such a good player and has settled into the Premier League very well!

Finally, what do you think the final score will be come Sunday?

It will be a tough one for David Wagner and Huddersfield Town this weekend. I can see them using the same defensive approach as they have done at the Etihad in the past but for me, City are just too strong and I can see a comfortable win for Guardiola & co. FT 2-0.