In what was a baking hot afternoon at Wembley Stadium, Manchester City poured the cold water on any pre-season concerns regarding their ability to continue on from last season’s 100 point heroics as they beat FA Cup holders Chelsea 2-0 to win the Community Shield.

Sergio Agüero seised the bull by the horns as he netted his 200th goal for the club and, as was fitting for the rest of the team, proved his appetite was not to be satiated as he netted another to put the tie to rest.

Here’s what we saw as the biggest talking points as City added their first trophy of the season, yet played like they could win more…

TROPHIES FOR THE TAKING

After a summer of global excitement with the FIFA World Cup in Russia, international attentions had since turned into nervous anticipation as City looked to start from the ground up in their campaign to build upon the imperious displays of the Centurions campaign. Debates had once again resurfaced as to whether the Community Shield should count as a trophy, as always vocally denied by those not involved in the year’s match up of Premier League and FA Cup champions.

However, even if people continue to question the Community Shield’s validity, no one could question City’s ability, as practically every player spent their time on the pitch darting for every ball possible as if it were the match to decide the season. For surely if Pep Guardiola still harbours doubts as to if this team will continue to push themselves into the 2018/19 season, the sight of his players lifting the shining silver plate aloft after the match will have gone someway to making the prospect of further glory, and further silverware, a certainty rather than a possibility. Indeed, whilst rival fans will persist with the debates that their team has what it takes to dethrone City in the league (or that it is simply ‘their year’), Blues will be only further convinced that Guardiola’s men can not only defend their Premier League title, but shoot for multiple trophies also.

RENOVATING AND INNOVATING THE WINNING FORMULA

The question on the mind of many City fans leading up to the game seemed to be whether Guardiola would opt for a 3-5-2 formation over the typical 4-3-3 largely employed last season to great effect. It is a dilemma every champion must face — continue with the trusted formula or tinker with the winning recipe. However, having opted for three at the back in the last two pre-season games, combined with the long-awaited return of Benjamin Mendy, the odds looked in favour of change as time ticked toward kickoff.

Yet Guardiola ultimately decided to stick with the 4-3-3 system. What we saw as a result however, was not the same City as last season, but one with its own variety of fresh faces and new dynamics. Rather than rest of the laurels of success, City’s victory over Chelsea showed that tinkering had indeed occurred, that which was handsomely rewarded with both silky play and exciting electricity across the pitch at times.

Champion of the changes was Bernardo Silva. A being of pure ferocity in his new-found number 8 role, he seemed to cover every blade of grass in attempt to win the ball back, and certainly wasn’t too shabby in possession either. The Portuguese player was free to pick a preference as to which opportunity he fancied picking a man out in front of him or simply dancing through those in the middle of the park, providing stern evidence that the best way to replace a Silva in midfield is to simply introduce another.

Add to this the reemergence of Benjamin Mendy, who decided that rather than document City’s success on social media he would instead be a chief part of it. You couldn’t blame anyone for perhaps not recognising the figure who appeared on the left flank, as the Frenchman was sure to leave his injury worries and pretty much anyone else behind him as he flew up and down his side of the pitch. The commentators on BT Sport were right to highlight his marauding runs during the game, for it beggars belief that a team who finished the league with 100 points could only add another string to their bow as Mendy’s energy innovated City’s play to such an extent that often other players were left too surprised by his presence in the final third to know what to do. 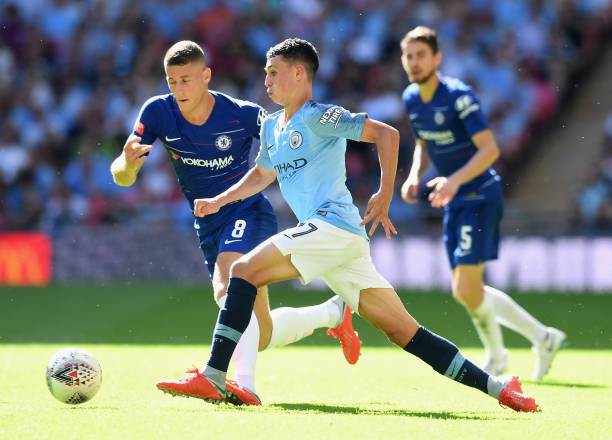 When Bernardo Silva was not doing his best impersonation of Lionel Messi on the ball, it would fall to the young Phil Foden to step up to the plate and orchestrate proceedings from the midfield. Little did anyone know that as it fell, the 18 year old’s foot would delicately caress it into his feet, and play as if he’d been in the first team for as many years as he is old. For it is perhaps the highest praise one could give to the young Stockport lad was that he did not look out of place in the slightest amongst a host of talented and legendary players, balancing deft footwork with a selection of sumptuous passes through to the front line.

Though outmuscled at times, it is an exciting prospect to consider that Foden could quite literally grow into an outstanding player for City. Not content with the wait however, the young Englishman took matters into his own hands as he chose to lay off a delicate pass to the eternally reliable Sergio Agüero, resulting in both the opening goal of the game and the Argentinian’s 200th for the club Foden has supported all his life. If sceptics and cynics were wondering if Foden will have a place in the City history books in the future, then rest assured, he already does in some small way.

With an amazing 104 touches, 87 passes, and 96% passing accuracy, it was John Stones who topped all the match rankings as he showed every bit of evidence that he has continued his fine World Cup form into the club season. The Yorkshireman looked a new man from the one who had struggled for confidence at City since picking up an injury over the Christmas period, stamping his authority over the backline assertively and assuredly as he partnered Aymeric Laporte in City’s new-look defence.

It is fitting that both men had a significant role in initiating the play that led to both goals for Guardiola’s team, with the Catalan’s out-from-the-back philosophy was married with polished defensive poise on both occasions. For the first goal, it was Laporte who threaded the eye of the needle as he found Bernardo Silva with a smooth 30 yard pass, allowing the Portuguese playmaker to turn and play in Phil Foden and Sergio Agüero to open City’s account for the afternoon. Contrastingly, the second saw Stones burst out from the back to snatch the ball from the clutches of Chelsea’s front line, making a daring run up the field to bring City forward and outnumbered the London side in their own box as Agüero added the next goal.

Should Stones and Laporte continue as the first choice centre back pairing, then there is every chance they could be as solid at the back in the coming season as the former’s name implies. With both players just 24 years of age, the blossoming of their partnership could see Blues bear witness to the beginning of a solid new defence for years to come. 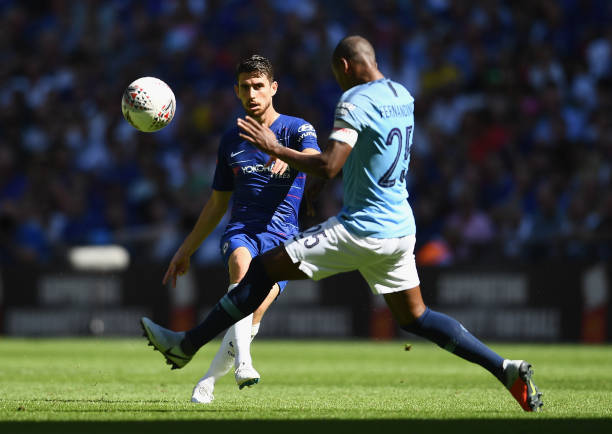 JORGINHO? NEVER HEARD OF HIM

A comforting final note lies on the role that Jorge Luiz Frello Filho, otherwise known as Jorginho, had to play in proceedings. With the Italian put on a pedestal as the number one transfer priority for City from even before the beginning of the transfer window, the shocking developments of the former Napoli man instead following former boss Maurizio Sarri to Stamford Bridge were seen as a complete failure for City to land their most urgent target.

With the uneasiness that followed Jorginho’s move to Chelsea, it is understandable that he certainly wouldn’t have been looking forward to facing his former prospective club in his very first competitive fixture in England. Such were the host of statistics being thrown around as to Jorginho’s dominance in the Italian Serie A and his remarkable suitability to Guardiola’s style of play (that which this writer is guilty of), there perhaps would have been an air of resignation if the seemingly perfect signing for City had instead shown them a clean pair of heels and ran the game for the duration of the 90 minutes.

Instead however, the now-Chelsea man was not to cover himself in glory on this occasion, as besides a few neat passes and controlled possession in the first half, the Italian was rather indistinguishable from the rest of a non-plussed Chelsea team for the majority of proceedings. Though it is impossible to take account of a player from the one single encounter, the ease by which City bypassed the new Chelsea fulcrum put a number of concerns to rest as if a critical mistake had been made over the summer. Just for God’s sake, let’s make sure we protect Fernandinho for the coming season.