The second round of World Cup 2018 group stage games is now over, with a mixed bag of results for Manchester City’s sixteen stars. From a humiliating defeat to Croatia to a demolition of Panama, we take a look at how our blues in Russia are getting on…

It was a disastrous night for Argentina as they lost 3-0 to Croatia on Thursday. Nicolas Otamendi was the man at the centre of the storm, and despite his best efforts the defender could only watch helplessly as a series of terrible mistakes allowed Luka Modric and company to ravage his team. Sergio Aguero also started but was taken off before the hour mark having struggled to make an impact.

Still no Vincent Kompany for Belgium as he watched on with injury against Tunisia on Saturday, but Kevin De Bruyne put in another good shift, winning more than his fair share of balls in midfield and grabbing his second assist of the tournament for Eden Hazard’s second.

Gabriel Jesus was the only City player starting for Tite’s men on Friday afternoon as they edged past Costa Rica late on. Danilo missed out through a late injury while Ederson assumed his normal position as Brazil’s substitute goalkeeper. Fernandinho arrived off the bench in the dying minutes.

It was a fine day for England as they took Panama apart with a series of brilliant set-pieces on Sunday. John Stones bagged a sensational brace, heading in the opener before turning in a rebound for England’s fourth. Stones was in fantastic form, looking imperious at the back and (dare I say it) showing shades of Vincent Kompany. Raheem Sterling also started and got two assists, while Kyle Walker showed some good defensive skill against an incredibly poor opponent. Fabian Delph came off the bench in the second half. 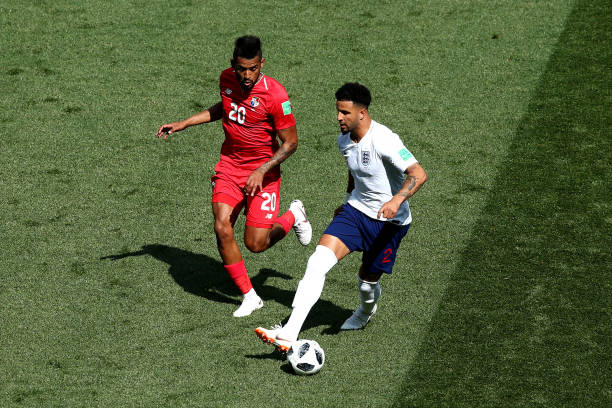 Benjamin Mendy was again left out as France beat Peru 1-0 on Thursday. With reports that the left-back struggled in a friendly against a Spartak Moscow youth team earlier in the week, it’s looking unlikely that we’ll see Mendy at this tournament.

Ilkay Gundogan came on as an early replacement for Sebastian Rudy on Saturday. The City midfielder played most of the game as Germany came from behind to beat Sweden 2-1, enjoying some nice touches for his national side.

Once again, Bernardo Silva started for his country, but he again failed to leave any mark on the game as he was taken off in the second half of a 1-0 win over Morocco.

Bernardo’s namesake David Silva also started in this round, as Spain edged past Iran by a goal. While David kept things tidy he didn’t manage to hit the world-class levels we see from him at City.

Before we wrap things up, time for a quick…

Aaron Mooy put in another stellar performance as Australia managed a battling 1-1 draw with Denmark.

Aleksandar Kolarov captained his side once again as Serbia fell to a narrow defeat at the hands of Switzerland.

Willy Caballero suffered one of the worst moments of his career as he gifted Croatia the opening goal in Argentina’s 3-0 demolition.

The next four days will bring some very important games for City players, with all of the final sixteen group stage matches – but which of the sixteen will still be in the competition by Friday morning?