Manchester City, Chelsea and Paris Saint-Germain are fighting it out for Bayern Munich striker Robert Lewandowski, according to Sport.pl, a major source in his homeland of Poland.

Lewandowski, 29, has been one of Europe’s most prolific strikers for the past eight years, and worked with Pep Guardiola during the Catalan’s time in charge at Bayern, scoring 42 goals in Pep’s last season at the Allianz.

And Mateusz Borek of Polsatu Sport has sensationally claimed that Manchester City are ‘definitely interested’ in Lewandowski, with Guardiola keen to link up with the Pole again.

However, it is Premier League rivals Chelsea who have made the first concrete offer as they look to rebuild following a disappointing season in the league. Alvaro Morata has not cut it up front and Lewandowski would be a certain upgrade, though may not fancy joining a club without Champions League football next season.

Paris Saint-Germain is also a possible destination, particularly if Edinson Cavani or Neymar leave the club. Lewandowski’s agent Pini Zahavi has a close relationship with the Ligue 1 giants which could help any deal. Real Madrid also can’t be ruled out, having previously shown interest. 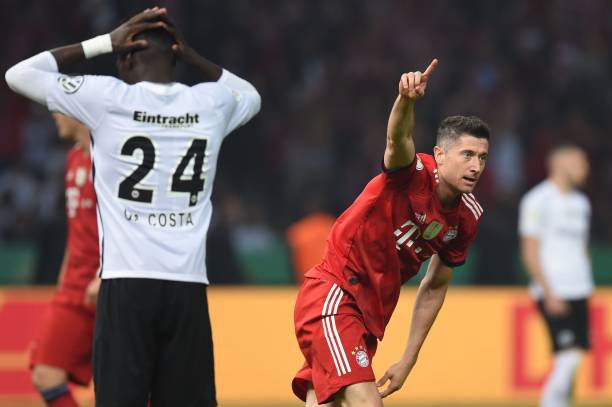 The future of Lewandowski should be clarified before the World Cup in Russia, and it is reported that although Bayern have publicly declared that he will stay, he wants to leave the Bundesliga at all costs for a new challenge.

A traditional centre-forward is not thought to be on City’s agenda, so it’s possible that any interest they have will not be followed up on, unless in the unlikely event that Sergio Agüero leaves the club this summer.

Agüero has been linked with a return to former club Atletico Madrid, but those reports have been played down recently, with the player happy to see out his Man City deal before returning to Argentina in 2020.

From France: City Football Group to lose Guardiola’s ‘likely successor’ at Manchester City
Manchester City in talks with Leicester as champions close in on Riyad Mahrez – reports
To Top