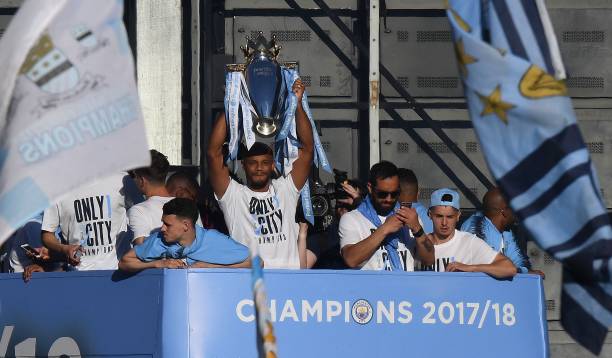 As we all know, Manchester City have won the Premier League, and they did so in style. The Blues beat second-place Manchester United by a huge 19 points and secured the title over four weeks ago. It was about time for a celebration…

Pep Guardiola joined Manchester City players as they paraded through the streets of Manchester adorning the Premier League trophy (along with the Carabao Cup) in an awesome display of their success this season. The team cruised through the city in open-top buses, and an estimated 100,000 passionate fans turned out to enjoy the sunshine and bask in the glory.

The event took place on 14th May and allowed fans to celebrate alongside the players and manager who made it all happen. The parade lasted around one hour, with a further one-hour show at Deansgate, where Guardiola and many of the players made speeches and shared their sentiments.

This season has been nothing short of excellent for Manchester City. Not only did they win the Premier League (and the Caraboa Cup), but they also set a total of six new records. City became the first team to record 100 points in the Premier League, toppling Chelsea’s previous record of 95 points. They recorded 32 wins, which is a new record for the biggest points-winning margin across all Top Flight competitions. The team also scored 106 goals, setting another record for the best goal difference.

City’s only real downfall this year was in the Champion’s League, where they failed to make a major impact in the knockout stages. It’s not easy for fans to forget the quarter-final, two-leg defeat to Liverpool, who now stand as only slight underdogs to win the finals against Real Madrid. Liverpool gave City a 5-1 whopping on aggregate, ending their UEFA dreams.

Yet Guardiola, the City team and fans will not likely despair over this. City more than made up for it with their dominant domestic success, and there’s no shame in saying that they are the strongest team in English football right now —by far— and deserved what they achieved.

The victory parade left from Manchester Cathedral at 6pm, touring through the city centre for around an hour before parking up at Deansgate for a final show at 7pm. Guardiola appeared on stage with most of the team; only David Silva and top goal-scorer Sergio Aguero were missing. Aguero is receiving knee treatment in Argentina ahead of the World Cup, while Silva had to miss the event for personal reasons.

Guardiola said a few words to the crowd, thanking them for their support and hinting that he will be enjoying the summer off (by relaxing and watching the World Cup) before returning “stronger next season”.

Players also made speeches, including captain Vincent Kompany, star player Kevin De Bruyne, and an emotional Yaya Touré, who is leaving the club on free transfer. Kompany then raised the suspense before lifting the Premier League trophy high to the sound of thousands of cheers.