Pep Guardiola’s expensive overhaul of the full-back positions last summer, which saw Pablo Zabaleta, Bacary Sagna, Gaël Clichy and Aleksandar Kolarov leave the club, was seen as a necessity for City to kick on from a disappointing 2016/17 season.

It can safely be said that the £50million acquisition of Kyle Walker from Tottenham has been the most successful signing for the full-back positions so far, with Danilo in and out of the team and the popular Benjamin Mendy missing most of the season through injury.

Walker’s lung-bursting runs up and down City’s right this season have played a big part in the success, which has led to two trophies being raised by club captain Vincent Kompany.

Despite his good form, Walker hasn’t been without his faults and has often been criticised for losing concentration and making mistakes. 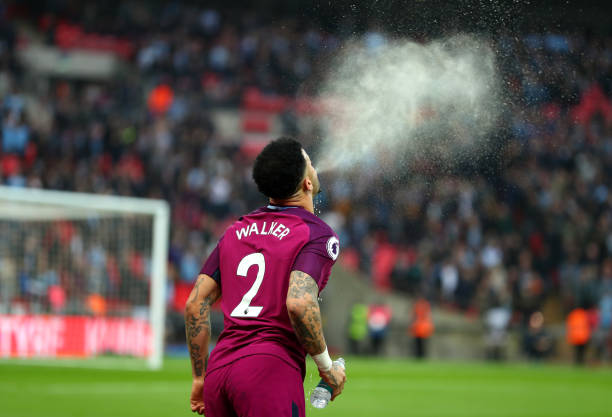 Pep Guardiola himself, speaking in the second half of his Friday press conference, alluded to that and suggested that the 27-year-old can still improve into an even better right-back.

“We are so satisfied about his level,” Guardiola told the media. “We have spoken to him many times and still he has a big gap to improve, his style, his way to play and his focus in the game.

“Hopefully we can help him have a target for next season, to try and help him be a better player.”

The City boss was quizzed on exactly how Walker can improve and he was happy to elaborate.

“His accuracy with the ball, making simple passes – because he can lose the ball – and to be focused on what he has to do for 90 minutes.

“Sometimes he has high moments and then he is down low. He needs to maintain as a defender a 7, 8 [out of 10].

“You have to be focused on what you have to do and it doesn’t matter what happens during the game, good or bad, because you are a top, top player and he can do it.”

Walker will be named in Gareth Southgate’s 23-man England squad for the World Cup in the coming days and is expected to be the first-choice right-back for the Three Lions in Russia this summer.