The 19-year-old is the second Ajax player that City are now said to be interested in, with their in-demand central defender Matthijs de Ligt being commonly linked with a move to the Etihad Stadium in recent weeks.

The son of former Barcelona star Patrick Kluivert, teenager Justin has exploded on to the scene this season with 10 goals and 5 assists in 27 Eredivisie starts.

Kluivert is a two-footed winger with great pace and skill, and his ability to play anywhere across the second line of attack is something Pep Guardiola will appreciate in a player. 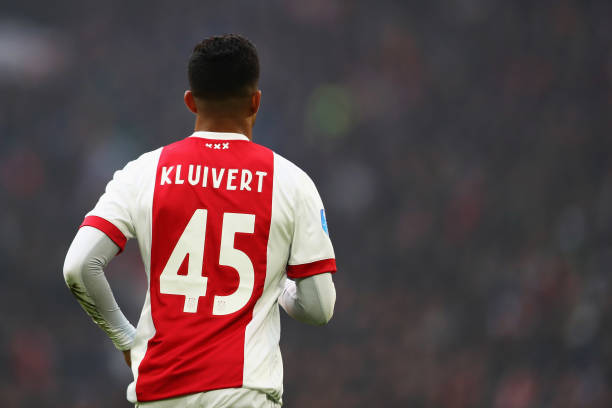 He is just one of numerous names said to be under consideration at City, with the likes of Riyad Mahrez and Leon Bailey other realistic players being talked about, while Kylian Mbappé and Eden Hazard represent dream signings who would be much more difficult to sign.

Kluivert is approaching the last year of his first professional contract and City would not have to break the bank to sign him were they to make him their number one target to reinforce the flanks.

Manchester United are also linked with Kluivert, who is represented by the notorious super-agent Mino Raiola, but his relationship with the Red Devils is said to have deteriorated in recent months, leading to him offering Paul Pogba to other clubs.

Raiola has also spoke poorly of Pep Guardiola, calling him a ‘dog’ and ‘coward’, but City’s signing of another of his Dutch clients, Philippe Sandler, is proof that the club are still willing to do business with the Italian agent when necessary.

Pre-order the Kit of Champions at the City Store ahead of its release on 14 May!