Manchester City are pursuing Ajax centre-back Matthijs de Ligt and have made a ‘serious commitment’ to acquiring the 18-year-old this summer, Barcelona-based newspaper Mundo Deportivo reports.

This follows up on news from the Sunday Mirror that Pep Guardiola has sanctioned a move for the defensive prodigy, after Txiki Begiristain recently visited Amsterdam to confer with City’s chief Dutch scout Kelvin De Lang about De Ligt.

Now more information has arrived from Catalonia, with journalist Francesc Aguilar reporting that Txiki Begiristain, City’s director of football, has already ‘gone to work’ on a deal for De Ligt, who is considered one of the best prospects in the game.

Although City are said to be confident of winning the battle for teenager De Ligt, they potentially face tough competition. European giants Barcelona and Bayern Munich are big admirers of the player, while North London rivals Arsenal and Tottenham would also like to sign him. 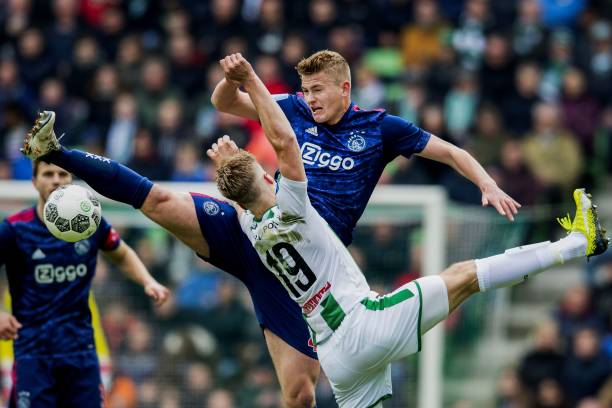 Tottenham boss Mauricio Pochettino likes the idea of reuniting De Ligt with his former Ajax teammate Davinson Sánchez in the heart of the Spurs defence, while Arsenal plan to rebuild their defence but have ‘slowed their interest’ in De Ligt with Arsene Wenger’s departure and no replacement signed yet.

Manchester United are also mooted as potential suitors for De Ligt, although unlike the other clubs mentioned, Mundo Deportivo are only speculating on that because they want a replacement for Daley Blind.

A fee of £50million has been reported for De Ligt, a huge figure for a teenager defender, but potentially a good long-term investment given his age and ability.

The word from the Etihad has been that City plan only two major signings in the upcoming transfer window, a defensive midfielder and attacker, but the number of reports linking De Ligt, a centre-half, with a move to Man City are growing by the week…