Atmosphere. The buzz word that has seemed to engulf the accompanying discourse of the past three weeks of our footballing calendar. From the famous Anfield noise, to the cries of ‘Emptihad’, stadium atmosphere is a topic that has played a significant role in the outcomes of our recent two losses. Back-to-back defeats are unprecedented for this side and it’s imperative that we don’t lose a third.

Despite the laughs of derision aimed at Liverpool fans before kick-off at Anfield, it is unconscionable to believe that the fantastic support generated by the Merseyside faithful did not play a contributory role in the outcome of that game. The constant jeering of City players mixed with the fantastic support of the home team demonstrated just how decisive and impactful home support can be. Yes, City were undone by another barnstorming Liverpool display, but we need to learn from atmospheres like that to our advantage.

As Saturday rolled on and the Etihad filled, the atmosphere and excitement in the ground built to a level not seen for some time. As Vinny and Gundogan put the side two-nil in front, the Etihad was rocking. Seriously, rocking. Long derided by fans as a stadium without support, the incredible noise from around the ground in the first half of the derby noticeably spurred the team on, carving United open at will whilst riding the wave of euphoria in the ground. 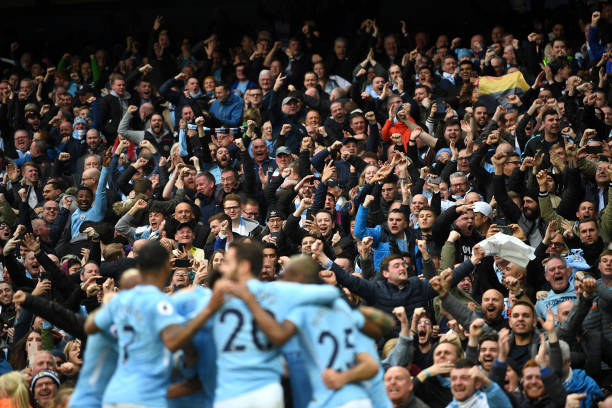 Alas, the second half arrived and upon Pogba’s first goal, the once joyous City faithful fell silent, nerves jangling. The old adage of ‘Typical City’ rang true once more but the overriding elation in the stands quickly dissipated into a nerve-rattled dissonance. With the stadium stunned into silence by two quick goals, it is erroneous to think that the lack of belief transpired into the players. The arrogance of the fans chanting ‘Ole’ during the first half had swiftly come back to bite us on the metaphorical backside.

The sheer silence of shock rang throughout the Etihad, and with support no longer coming their way, the players were unable to find their rhythm again. Whilst the manner of the defeat was disheartening, it is imperative to remember that we are THIRTEEN (13) points clear of United with just two wins needed from six remaining games. Whilst a glorious opportunity was missed, the support of the team must remain even when the going, inevitably, gets tough.

With a difficult, uphill battle against Liverpool on Tuesday night in the Champions League, the players need the fans on their side. In the pre-match press conference, Fernandinho said the fans were needed “more than ever”. With the players seemingly identifying the fans’ support as vital, we CANNOT let the team down again. The drop of heads and lack of noise in the second half of the derby made the stadium a difficult place to be. Regardless of what happens on Tuesday night, let’s give the players the reception they deserve and give them the extra adrenaline and support needed to overturn this deficit.

If you know anything as a City fan, it’s to fight to the end. So, show it!