It was men against boys in a much anticipated match between City and Chelsea, where City utterly dominated Chelsea and came out as comfortable winners. It was a match between the reigning champions and the champions elect, where City bossed Chelsea on all fronts, and showed why the Blues are sitiing comfortably at the top of the Premier League table, just needing four more wins to win the title. This is how I rated the players.

Hardly had anything to do, except pinging the ball back to the centre-backs or the in the midfield, which he did with utmost calmness. Had more touches than Chelsea’s main man Eden Hazard – 12 touches – in the first half. A decent perfomance by the man between the sticks, came early off his line, looked confident on the ball, a very Ederson like perfomance.

Another tireless display by this man on the right flank, he has been exceptional this season and once again showed that he is one of the best right backs in world football. Tirelessly running up and down the flank, stopping the occasional counter attack, outplaying and outpacing the likes of Willian and Pedro on numerous occasions. Played a couple of misplaced passes in the second half, but a solid game all along.

Better of the two centre backs, he was in the right place at the right time on almost every occasion, did not put a foot wrong while defending, and looked comfortbale on the ball, as he has done for most of the season. He is arguably City’s best centre back at the moment, and probably one of the first name on the teamsheet.

Had a quiet game in all honesty, decent perfomance at the back, defended well against Eden Hazard and looked good in the air, winning most of the headers when Chelsea tried to play route one football rather than playing out from the back. Will look more comfortable once he’s settled in the Premier League.

Busier of the two full backs, both while attacking and while defending. He did good on both the fronts, played a couple of one-twos with Sané and Silva when coming inside the midfield, on the other hand he looked solid when he was called upon to defend at the back, which was a rarity in this perticular match. Pep has taken him under his wing and moulded him into a classic Pep full back.

He created a new record tonight – the most touches by a single player in a single game, in the history of Premier League football. Fernandinho has the heart and the passion, and has been City’s engine for a huge part of this campaign, but Ilkay showed he is more than capable of filling in his boots, and he did it with some style today. He made the midfield tick, he worked hard and won the ball in the oppositon half on many occasions. A top perfomance by the German tonight.

Merlin was at it again. He outplayed, outshone and outclassed the Chelsea midfield on all fronts. He looked like a man possessed on occasions, where the ball was stuck at his feet. Didn’t fail to find little pockets of spaces in and around the Chelsea half and provided the assist for the all important goal. One of the best, if not the best to wear a City shirt. 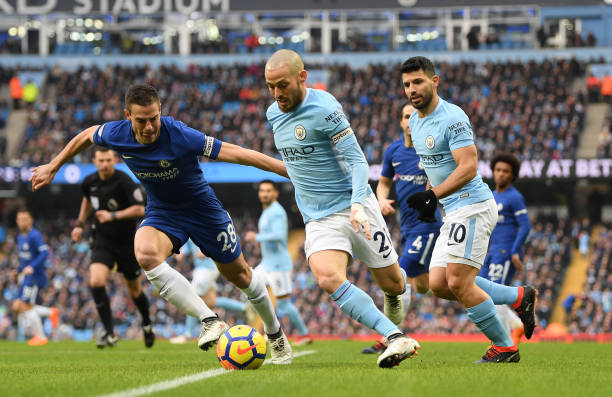 Not at his very best tonight, but still had a decent game against his former employees Chelsea. He dictated the game when the ball was not with David Silva and his running without the ball was absolutely inspiring. Showed his tenacity and aggression pressing high up the pitch, but still not the best game by our star man.

Looked back to his blistering best, turning defenders inside out, showing great control in tight areas, provided width and got past Moses on several occasions. Had a great first half, forcing an off the line clearance by Azpilicueta. Looked a bit jaded in the second half, but the German looks back in form. The fearful aspect about Sané is, he will only get better, playing under a brilliant coach, he is all set to become one of the best in world football.

Got the winning goal, and he looked to threaten Chelsea everytime he got the ball. Finally looks like a player that City signed from Monaco, the ball sticks to his feet, and he can beat defenders with ease, and is deadly while cutting inside with his left foot. Lacks the final pass at times, but another player who will surely excel in the seasons to come at Manchester City

Didn’t get a goal but Kun looks to be at his deadly best again, strong on the ball, uses his low centre of gravity to wriggle past defenders, shows nimble feet and is still quick as ever, and his run in behind triggered the movement for the match winning goal. He has been scoring freely since the turn of the year, and with Pep finally showing trust in him, he has added another dimension to his game, he runs tirelessly, pressing the opposition defenders almost every time, and he never gave up. Still one of the best around.

Hardly had impact on the game, but giving him minutes on the pitch is of utmost importance, as he would be essential in the business end of the season.

His versatility has been of great use for Pep and in turn for City, is important to defend a one goal lead.

Played for a couple of minutes, not sure if he even had a touch. But the feel of a big game is important for the 17-year-old.

Predicted Man City XI vs. Chelsea: Aguero to lead charge as Blues close in on title
The best team in the land, big game Bernardo and Gundogan’s masterclass: What We Learned from Man City vs. Chelsea
To Top