It’s easy to predict that Manchester City will dominate the next few years in English football, especially with the elite tactician they have as coach.

There is no surprise that Pep Guardiola would eventually blitz through the Premier League in his trademark possession fashion. “I am not going to change,” was the statement from the former Barcelona coach on his style of play – and we should be glad he hasn’t.

But for what it’s worth, one thing that has differed with City and Guardiola, is that they have gone throughout the 2017/18 campaign playing a different shape to the original blue print. Yes, they have broken all records this season. Yes, they have overthrown those in their path, but injury to their £52million left-back Benjamin Mendy early on in the season, left the Blues boss with a complete rethink in the team’s set-up.

The initial 3-5-2 formation was fundamental to City’s success at the start of the season. It was inevitable having David Silva and Kevin De Bruyne in the team, to make up the three in midfield alongside Fernandinho, but – Kyle Walker and Mendy were the key reasons why they demolished the likes of Liverpool, Watford and Feyenoord, taking up the wing-back positions either side of the trio in the middle.

That’s what made City tick. That’s what gave them new width, in which they didn’t have in the former season. And, along with the two upfront in Gabriel Jesus and Sergio Aguero, there was a deadly partnership on the cards. 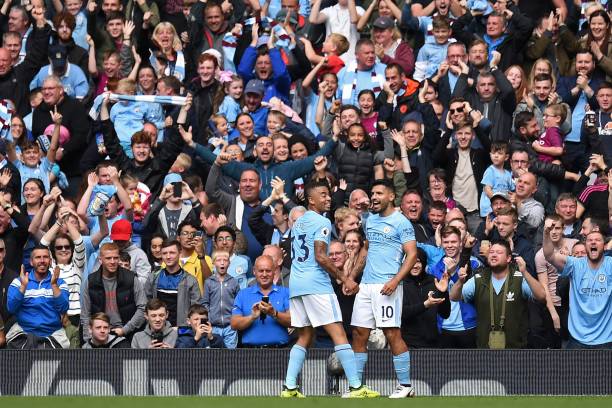 Guardiola changed suit to a 4-3-3 layout, keeping the same three in midfield, but swapped to one upfront and two wingers either side. So, arguably Manchester City have dominated with their second choice formation. Scary… They have been out of shape, in some ways.

You could argue the point that Leroy Sané and Raheem Sterling wouldn’t have been as stellar, when they weren’t in the team to begin with – and the credit has to go to the manager for significantly improving these youngsters. Those two were sporadically brought into the team into the second-half of a match, to poach a goal or two, or assist, in which they’ve gone on to do on a consistent basis.

This only enhances the manager’s reputation as a one-off coach. He, Guardiola, is a coach in which given obstacles in his path, he bypasses them with an aura and plan that makes it look easy. He has shown his worth in transforming the out-of-picture Fabian Delph into arguably the best left-back in the country, this year.

When the Englishman has been injured, youngster (and attacking midfielder) Oleksandr Zinchenko was taken under the tactical wing of Guardiola and has shown off his footballing abilities on the left side of defence.

So, the plan A was to have Mendy – up and down the left channel, but unfortunate and inevitable set backs have tested the Spaniard as a coach. Who else could look at Delph and Zinchenko and think ‘left-backs’? Guardiola has taken deadwood at the club, that was ready for the scrapheap, and refurbished it in a way others cannot.

Eventually, the Blues will, and should become Champions, which has been a foregone conclusion since the 1-0 win at Stamford Bridge against Chelsea back in October. They have a gulf of breathing space above neighbours Manchester United and co – 16 points in front of the Reds, but arguably it should and still could be more.

Pep has delivered the most exhilarating football the Premier League era has come across, this season – and to think, what this outstanding team could achieve, playing their desired formation…

An Objective View: Guardiola, Ferguson and the spending comparisons between City and United
Opinion: Pep Guardiola is building a siege mentality at Manchester City
To Top