As Manchester City entertain Burnley at the Etihad today, we look back to the 6-1 thrashing of the Clarets that started well but still had City fans worried!

City started the game with tenacity and ruthlessness, and the away side made hay while the sun shined (just) to go 3-0 up in the first 7 minutes.

The home fans and Burnley manager Brian Laws were catatonic as the Blues were rampant. Burnley’s season had dramatically spiralled downwards and at the start of April they needed a miracle to survive, City would provide no respite.

The away side capitalised on Burnley nerves almost immediately as Adam Johnson rattled the post with a deflected strike. Emmanuel Adebayor then made no mistake with the opener as the Togo international found himself free in the box and thundered home past ‘keeper Brian Jensen. 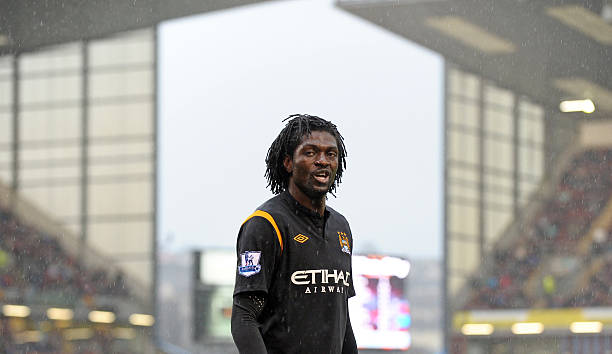 Two minutes later City had their second as Craig Bellamy finished smartly after a through-ball from Carlos Tevez, as Burnley were hit on the counter attack.

The misery continued for the home-side as City made it 3-0 almost immediately. Jensen made as a complete hash of a weak Adebayor shot and could only parry into Tevez’s path, who tapped in.

Burnley had imploded, the fans turned on the players and manager Laws looked truly lost on the touchline. His mood wasn’t to be improved as midfielder Patrick Viera made it 4-0 on the 20 minute mark.

Another corner and more poor marking from the Clarets as Frenchman Vieira nodded in a powerful effort from a Johnson delivery. This was Vieira’s first goal in City colours.

City were turning on the style now, Burnley were limp opposition and could only watch as City score a superb fifth goal on the stroke of half time. A brilliant through-ball from Tevez split the Burnley defence and Adebayor rushed ahead to score again past Jensen.

The only help Burnley could receive now was from the heavens. The rain had been falling steadily during the first half, and during the half-time break a biblical amount of rain fell on Turf Moor.

City fan who had been enjoying a wonderful display now feared the game might not continue, as the rain showed no sign of abating. The Burnley ground-staff did nothing to calm these fears as their efforts to maintain the playability of the pitch lacked their usual lustre. Indeed if the heavens continued to open with such ferocity, the game might have been abandoned.

The Blues did their best to battle the conditions and an improving Burnley side. They went 6-0 in front just before the hour mark after another Johnson corner found Vincent Kompany free this time, and the Belgian headed home with ease. 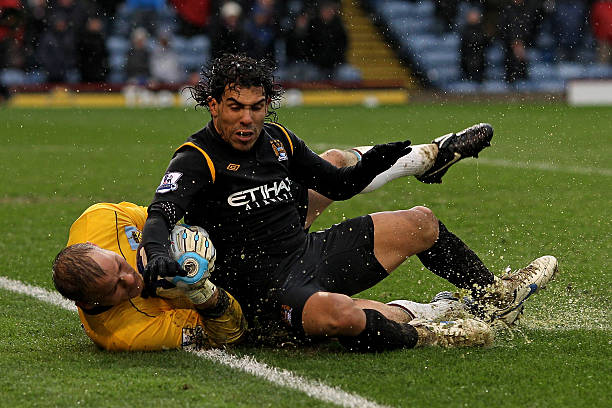 Burnley continued to improve, in fairness the only way was up after their first half display. They grabbed a consolation goal on 71 minutes after Steven Fletcher produced a smart finish past Shay Given in the box.

The rain calmed down but the pitch was bordering on unplayable. Thankfully referee Adam Wiley ignored the pleas of Burnley players and staff, and allowed the game to finish.

Before the water turned the game into a slightly farcical event City showed just how good they could be when they brought their A game, Roberto Mancini was delighted.

At the end of the season, City were to miss out on Champions League football in heart-breaking fashion with defeat at home to Tottenham, who would beat them to 4th place. For Burnley, there was to be no great escape and they were relegated, finishing 3rd from bottom on 42 points.