With City having captured their key signings at full‐back in Benjamin Mendy and Kyle Walker, we take a look at how the new recruits will ease the woes in the centre of the Sky Blue defence.

In recent years, City’s downfall has often fallen at the feet of the centre‐backs but a large portion of this has been down to the clubs lack of investment, and weakness, in the full‐back areas. The Citizens have finally invested in the area, bringing in new boys Mendy, Walker and Danilo, a position that had received no investment since Mancini spent £3million on Maicon in the summer of 2012.

The lack of investment had seen all four of the club’s full-backs reach the wrong side of 30 and their decline was in full view last season, with Pablo Zabaleta, Bacary Sagna, Gael Clichy and Aleksandar Kolarov all now having left the club.

Speed and mobility are essential in this area to implement Guardiola’s game plan, something that all four of those aforementioned were unable to provide to the Catalan boss. Both Mendy and Walker will provide that energy that is so highly demanded as well as reducing the average age of the squad with Mendy and Walker only 23 and 27, respectively.

Despite Danilo’s hugely impressive start in pre-season, it is Mendy and Walker that look set to become first choice full-backs this season and with their introduction, we’re going to see a much more robust defence than the team who shipped four goals away at Leicester and Everton last season. 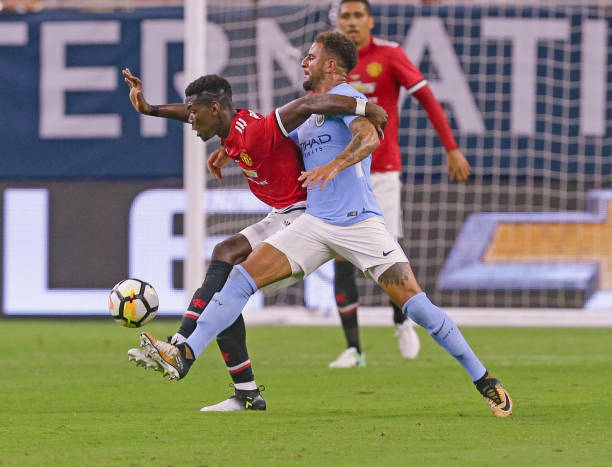 So how will the new boys ease our troubles in the centre of the defence?

Largely, the sheer speed and mobility of our new and improved full-backs means that our defence will automatically become less exposed. In times last year, our ageing full-backs were simply unable to keep up with the pace of the game, leading to the overexposure of our centre-backs, putting unnecessary pressure on the back line.

Further to that, City struggled mightily in defensive transitions last year, with centre-backs unable to cover for the advancing full-backs who were not able to get back. More often than not, our defence was left exposed when the team had lost possession and centre-backs were forced out wide in order to cover. This year, with Mendy and Walker’s blistering pace, the pressure on centre-backs will be lessened as both full-backs are able to recover quickly and regain their defensive position.

Of course, both Mendy and Walker will become vital in the club’s attacking football with their defensive duties often playing second fiddle to the attacking ones. Despite their capabilities going forward, both possess a greater ability in both areas than their predecessors. With Guardiola often deploying a high pressure game, two quick full-backs will allow the team to press as an entire unit, often leading to gaining possession of the ball higher up the pitch, reducing pressure on the defensive unit as a whole.

Similarly, the high pressure will often come from the two operating as wing-backs in front of a back three. This automatically improves the team in the centre of the park with an extra centre-back in the side, creating a strong back line from which the Sky Blues can launch their devastating attacks, as we’ve seen during the clubs preseason tour.

With the introduction of Mendy, Walker and Danilo, Guardiola has invested heavily in a previously ignored area and transformed the club’s defensive unit in a single window. With all the key full-backs now on board, Guardiola is now in the market for a centre-back to put the final piece in the defensive revolution puzzle.

All three of the new signings have already largely impressed both going forward and at the back and I don’t think it will stop there. It is already evident in just a few games how much of a difference having mobile full-backs has done for the club and there is plenty more to come as the Blues look certain to be challenging for the title once again.

Manchester City have made elite signings but will Alexis or Mbappé be the cherry on top?
City Twitter: Virgil van Dijk to City? Blues have their say on the possibility…
To Top